Whether its called "Old World," "Tuscan," or even "French Country," this kitchen exudes a warm and inviting feel. By applying a light glaze to the cabinetry, the new kitchen takes on an appearance of having been there for quite some time. The selection of a copper hood adds to the antique appeal. 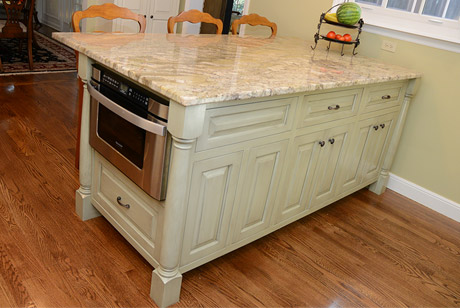 Relocating a wall separating the kitchen and dining room by only 18" allowed for a large peninsula with seating to replace a former table. An existing window was also re-sized to allow the peninsula to have its top at 36" instead of 30" as was the case with the table it replaced. In this way, it doubles as both a dining area and kitchen work zone.

See more of our work >