A previous kitchen remodel of this classic, mid-fifties home, did not fit well with the style and period. Inexpensive oak cabinetry with bulkheads and a lowered ceiling made the kitchen feel cramped and out of place relative to the home's style.

By relocating an exterior door, the counter space near the sink was increased. Removing the bulkheads and lowered ceiling allowed for taller cabinetry and built-up crown mouldings to fit the period of the house. And, removing a three-foot wall section, allowed integration with an adjacent desk area. While much of the new cabinetry is painted white, both the island and pantry wall cabinetry were stained cherry - a tie-in to the remainder of the home's built-ins. 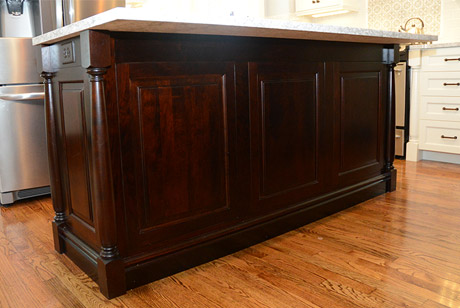 The original hardwood flooring was refinished after several areas were pieced in with new oak to cover areas exposed after wall removal. Water-proof casework replaced an exterior door that was removed. This kept from having a bricked-in patch that would never match the remainder of the brick.

See more of our work >